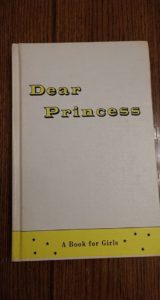 If you talk to women who grew up in conservative Anabaptist circles, you will find that a large number of them were given this book as young girls, often around the age of puberty, or even before, by well-intentioned adults who wanted to see them grow up to be successful women.

Unfortunately, the definition of success as depicted in this book is a little scary. 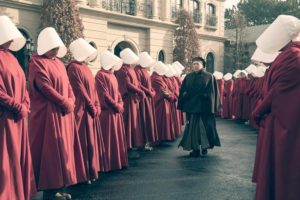 It looks kinda like this,
but without the color red. (obviously)

The important thing to remember as we dive into this book, is that it is written to princesses.

That is, it is written to depict to young teenage girls how they can grow up to be ideal women in their communities, finding favor with both God and man. (The right kind of man, of course.)

As book pedigrees go, this one is gold standard. It was published by Rod & Staff- an extremely selective publisher.

("Understand that when I say 'selective,' I'm not referring to quality," Father clarified wryly.)

Of course, (as always), Father is right. Writing quality is not the most important aspect that Rod and Staff considers. In fact, writing quality is hardly considered at all, as you shall see.

The premiere quality of Rod & Staff books is ideological purity. Every word, every gesture, every plot point is relentlessly in tune with the party line, and the lessons are driven home with the subtlety of a 20-pound sledgehammer.

You cannot be published by Rod & Staff unless your story, article, or novel (oops! storybook) is 100% pure of anything problematic.

Any idea or practice that anyone in their conservative setting may even have the smallest question about is ruthlessly expunged. (For example, I once read an article explaining that stories should not include scenes describing things such as a teenager helping himself to a snack in the fridge. In some homes, parents require their children to ask permission before getting a snack, and publishing a story in which a child does not ask could undermine their parental authority. (In the words of the Apostle Paul, "I lie not."))

Being published by Rod & Staff is a ringing endorsement of what you are saying. Let no one think that Dear Princess is some kind of fringe book that only a few crazies out on the edge espouse. These ideas are mainstream. (I mean, radically conservative Mennonite mainstream.)

Furthermore, Dear Princess was written by the wife of the bishop at the church at Crockett. (If you don't know the significance of that, you're probably not my initial target audience, but that's OK. I'll explain. Imagine that the Pope had a wife and she wrote a book about how Catholic girls should act. That's kind of what's going on here.)

You may wonder how a woman can write a book like this, without falling afoul of the Biblical injunctions against women leading.

There are several extenuating circumstances. First, it is written to girls, so it qualifies at "the older women teaching the younger." (I probably shouldn't have read it though, since that allows her to be teaching me.)

Secondly, the acknowledgements make it clear that "faithful brethren...reviewed this manuscript for soundness of doctrine and Biblical applications." So that makes it safe for consumption.

Finally, her husband, the revered Paul M. Landis is acknowledged for (among other things) his "patience, and immeasurable help during the months of preparation and (of course) for his final word in everything." Lest there be any doubt about who wears the pants in that house.

So, at the outset, let's just be clear that everything that this book talks about is indeed the position of the conservative Mennonite church.

Add to this the fact that the book is commonly read, frequently gifted, and usually put in school and church libraries, and you can't doubt that it is considered to be full of "good truth for youngsters."

You will see what it actually contains as we go along.