Note to readers: In this post, I am inaugurating a new practice. There are times when I wish to insert commentary directly into the quotes. Up to this time, I have resisted the urge. Now, I have decided to add the comments as I desire, but to mark them in green, like this, so that you can see what is my words, and what is the original text. Let me know what you think.

I have been looking forward to today's post for some time. This chapter is one of the main reasons that I chose to begin this series, because it shows so clearly the labyrinthine logic employed by these spiritual tyrants.

I think the thing that makes it the most insidious is how they pretend to be directly addressing the issues, and making their case, but they are actually setting up straw men instead.

But you don't have to take my word for it. See for yourself.

This chapter begins with Paul and the Kropfs working together building a new churchhouse. The subject of discussion turns to Rosemary and her family.

"How are the Witmers getting along down there?" Menno wondered.
Paul shook his head. "Doesn't sound too good. Her letters are cheerful, but I can detect some loneliness between the lines. They have absolutely no fellowship."
"Do they have church services in their home?"
"Yes, singing and Bible study. And Ed preaches."

"Preaches?" Menno cocked an eyebrow quizzically, and nearly tumbled from the roof in sheer shock. (Because only someone who has won the Magic Book Lottery is allowed to do that, even in his own home.)

"Wonder if any community folks come. Part of Ed's aim in going to such a remote place was to do mission work, but it would seem more Scriptural to give a Gospel witness from a church setting."

Something tells me this camel is going to get lots of play in this post.

Did you read what he just said? "It would seem more Scriptural to give a Gospel witness from a church setting"?

Do these guys have no shame?

Where's the Scriptural basis for making sure that a Gospel witness comes from a church, instead of a home, especially since the people in the early church MET in their homes.

This is incredibly common. Just say what you think is Scriptural without any reason for it. Cover yourself a bit. Don't say that it actually is. Say it seems to be that way, and go on. That puts the burden of proof on the other guy to prove that it doesn't SEEM that way. In which case, you can easily backtrack and never be wrong about it, and the other person usually just decides it's not worth the effort.

A church setting is more Scriptural than a guy going off on his own? What Bible is Menno reading? Paul didn't do that! He started a string of churches by going from one community to the next and preaching the Gospel, not by moving a dozen families in and starting a new church. And please don't use the old, worn-out "It was a transitional period" response. Because then I'm going to say that the head-covering in I Corinthians 11 was also a transitional thing, as was Acts 15 where the church made rules. That was clearly not for the church of today, because "transitional period."

"Rosemary is concerned about Curtis. He seems to feel pretty much like John does. John stayed in the Pinecliff community, you know, and they've been hearing in roundabout ways that he is running around with worldly girls." Because of COURSE he is. No doubt he is listening to country music as well.

"Menno shook his head regretfully. "If only Ed could see that he will lose his family instead of saving them by taking them away from the church." Because one family cannot possibly be The Church. It takes more than that to make a church. It takes a group, and a building, and RULES. But mostly rules.

"Individualism is a dangerous monster. Ed Witmer has all confidence in his own personal opinions and interpretations, and no confidence at all in a spiritual body of believers."

When someone like Ed lacks any confidence in a "spiritual body of believers," you have to wonder why that might be. Did the Spiritual Body of Believers throw him under the bus? Is the SBOB abusing their authority? Is the SBOB only working for some people, and leaving others out in the cold? 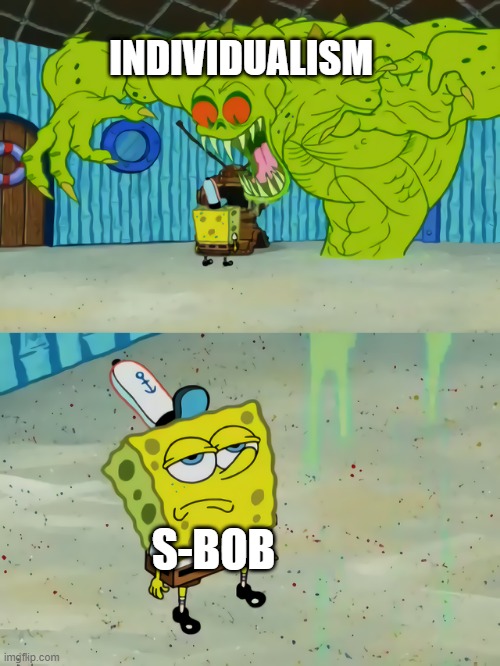 "Individualism is a dangerous monster."

But there's an even more important question. What bodies of believers can we trust?

But how can I decide which body is spiritual and which one isn't?
And the answer is "By whether or not they follow the Bible."

So in the end, it still comes down to having confidence in your own interpretation. And then you have to pick a body of believers that agrees.

So let's stop pretending that we can know which body (church) to trust without knowing what the Bible says, which requires individual responsibility.​

What's infuriating is that Mennos know this is true, when it applies to other denominations. If you are Catholic or Baptist or Presbyterian, you are supposed to read the Bible for yourself and individually discover the truth and become Menno, rather than "trust the S-BOB," because "it's not truly spiritual."

But if you're Menno, well, you know we are right, so be quiet and trust the S-BOB (pronounced: "hive-mind")

This whole scheme only works if you accept the a priori assumption that Mennonites are right. Which only happens if you already are.

"Did the whole thing start with his idea about rebaptism?" Paul asked.

"That was the issue, but it goes deeper than that. Ed thinks that the individual conscience is a higher authority than the church, but Christ plainly gave the true church authority to carry out His Word."

We could just hammer all the previous points I just made in response to this, because this thing really grinds my goat!

If you believe that the church has a higher authority than the individual conscience, than God judges you on the basis of obedience to the church, rather than obedience to your understanding of the Word of God.

If you accept that to be true, then it doesn't matter what church you go to, just be obedient to it.

Of course, Menno will deny that, because only the "true church" has Christ's authority.

So, how do we decide what is the "true church?" It must be our individual conscience that sorts that out. And we are back to square one. The individual is responsible before God to find the True Church.

(I'm completely ignoring his sweeping claim about Christ giving the Church authority to carry out His Word, because I would agree if it weren't misleading.)

This whole attempt to uproot the authority of the Holy Spirit through the individual conscience is at the root of everything that is wrong with all forms of conservatism.

Paul and Menno's discussion is only half over, but this post is plenty long, so we'll pick up the rest of their chat tomorrow, and we'll check in on Rosemary's life in Florida.

P.S. If you're new, you can click the category at the top of this post to see all the posts in this series.